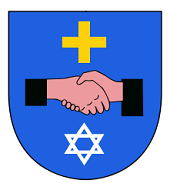 The coat of arms of Kolbuszowa to this day testifies to the history of warm cooperation between Jews and Christians in the town.

One example was recorded in the book "Remembering Kolbuszowa":
"In 1934 the town of Kolbuszowa responded in an unprecedented manner to the death of Jacob Eckstein. Eckstein, of course, was not an ordinary Jew. For many years, before his fortunes suffered at the close of World War I , he was thought to be the richest man in Kolbuszowa. More importantly, Eckstein had achieved prominence back in 1912: he had received a special commendation, a gold medal from Emperor Franz Josef, for contributing provisions to the Austro-Hungarian military during its maneuvers in the region.
He died on a Sunday in the middle of winter and funeral plans came to a standstill when the way out to the Jewish cemetery became buried under deep snowdrifts. But the mayor came to the rescue by ordering fifty workers onto the road to clear a path to the cemetery. Out they came, and in relatively short order the burial procession was able to get under way. So eminent was Eckstein that no one thought it strange to see such extraordinary measures taken on behalf of the Jewish community."

According to Krzystof Bielawski, the Jewish cemetery there was established in 1736. To this day, about 210 tombstones have survived, the oldest of which is to commemorate Eliahu Becalel, son of Shalom, who died on Pesach in 5618 (March 29, 1858). A list of matzevot from the Kolbuszowa cemetery, prepared by Jacek Proszyk, is available by clicking here. A rough map of the cemetery is available by clicking here. Recently, the ohel was rebuilt in the cemetery on the initiative of Rabbi Meir Gabaj. Right next to it, there is a modern matzevah surrounded by a fence, standing on the site of the alleged burial of the local rabbi Abraham Aron, son of Jekutiel Yehuda Teitelbaum of Sighet Marmatiei. There are also graves in the cemetery where about a thousand Jews who were shot in this place by the Nazis during the Second World War were buried. On the tenth anniversary of the murder, a monument was erected over their grave with the inscription: "Polish citizens of Jewish nationality, victims of the fascist terror of 1943. Kolbuszowa 1953. Kolbuszowa society". The cemetery area is covered with forest and fenced. Access is possible through a constantly open gate.

In 1989, the Nissenbaum Family Foundation made efforts to repair the fence and put the cemetery in order. In April 1989, some of the walls were repaired, and in part of the area a steel fence was erected, mounted on metal poles embedded in the ground. Before 2010, the ohel was rebuilt at the initiative of the "Ohele Tzadikos" Association led by Rabbi Izrael Meir Gabaj. Right next to it, there is a modern matzevah surrounded by a fence, standing on the site of the alleged burial of Rabbi Abraham Aron, son of Jekutiel Yehuda Teitelbaum from Sygiet Marmaroski.

Much more work remains to be done, especially in terms of cleaning the cemetery against the inevitable growth of vegetation that threatens to take over the entire grounds.